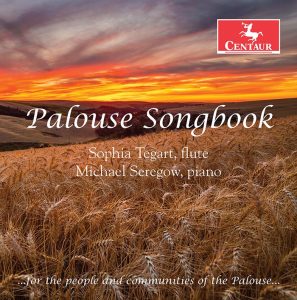 This album by Sophia Tegart, flute, and Michael Seregow, piano features contemporary compositions for flute and piano by six composers. I am thrilled to have contributed a new composition entitled “Leonardo Saw the Spring”

Many of my compositions have been inspired by poetry. Many poets in turn have been inspired by visual art, creating what is called ekphrastic poetry in which vivid and often dramatic descriptions of visual works of art form the basis of the poetry. To have both, the poetic interpretation and the visual art upon which it was based, created another inspirational layer to my creative process. “Leonardo Saw the Spring” takes as its inspiration the ekphrastic poem “Drawing of Roses and Violets” which in turn was inspired by Leonardo da Vinci’s Studies of Flowers. The poem was published in 1892 as part of a collection of thirty-one poems depicting paintings exhibited in European art galleries. The collection entitled “Sight and Song” was published by Michael Field which was the joint pseudonym of collaborative poets and lovers Katherine Harris Bradley and Edith Emma Cooper. In the preface the authors state: “The aim of this little volume is, as far as may be, to translate into verse what the lines and colours of certain chosen pictures sing in themselves; to express not so much what these pictures are to the poet, but rather what poetry they objectively incarnate.” This too is my aim with “Leonardo Saw the Spring” – to find the music that is innately embedded in the lines of the poetry and drawing.